World Sailing just released a Rapid Response Call for Team Racing that has a number of interesting interpretations of the rules.  Although Team Race Calls are only authoratative for team racing, they represent the thoughts of a number of rules experts*, and when calls do not involve special rules for team racing (as this RR Call does not) they frequently are useful as interpretations of the rules for fleet racing as well. 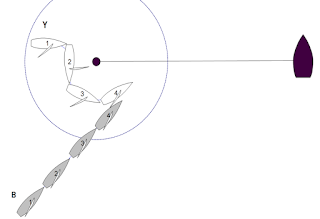 When Y enters the zone clear ahead of B rule 18.2(b) applies and B must thereafter give Y mark-room. However, when Y gybes onto starboard tack rule 18 no longer applies because rule 18.1(a) applies; see Case 132.

When Y gybes back onto port tack the boats are on the same tack and rule 18 applies. Y is again entitled to mark-room under rule 18.2(b) because it was not turned off by any of the conditions in 18.2(d). Her mark-room is room to leave the mark on the required side.

The main motivation for this call, I think, is the interpretation that, even though Y is sailing downwind for part of the time, the boats are on a “beat to windward”.  This interpretation comes from newly rewritten Case 132, which states that, for the purpose of rule 18.1 (When Rule 18 Applies) boats are on a beat to windward if the proper course for both is close-hauled or if one or both of them have overstood the upwind laylines of a mark.  In the new RR Call, the proper course for B is close-hauled and Y has overstood the port-tack layline of the finishing mark, so according to Case 132 the boats are on a beat to windward, and according to rule 18.1, while they are on opposite tacks rule 18 does not apply to them.  During that time, it’s just port-starboard; Y has right of way over B.

The issue of whether rule 18 applies to boats on opposite tacks at a finishing mark, when one of them has overstood the mark, was widely discussed in rules forums last year.  As Case 132 was written at the time, those boats were not on a beat to windward, leading to the possibility that a boat might purposely overstand the port layline at the port-end pin, then claim mark-room from a starboard-tack boat that was beating to the finish.  World Sailing fixed this by issuing a new version of Case 132 last November.

So rule 18 turns off at position 2 because Y and B are on opposite tacks on a beat to windward.  Fine.  But when Y jibes back onto port tack, rule 18 comes back in force.  So now, neither boat enters the zone during the current application of the rule, so we need to look at rule 18.2(a), right?

No, according to the RR Call, wrong.  Rule 18 has “memory”:  If rule 18.2(b) is in effect and rule 18 gets suspended, then comes back into effect again, the boat that was clear ahead or overlapped inside at the zone still is entitled to mark-room, unless she tacks, leaves the zone, or has been given all the mark-room to which she is entitled (see rule 18.2(d)).  (None of those exceptions applies in the RR Call scenario.)

This is not the first time the concept of "memory" has been enunciated.  In Team Race Call E10, the boat required to give mark-room at a windward mark tacks and then tacks back into an inside overlap.  In that situation, it makes a lot of sense to re-impose rule 18.2(b); rule 18.2(d) only turns off rule 18.2(b) when the boat entitled to mark-room tacks, leaves the zone or has been granted mark-room; the other boat cannot escape her obligation to give mark-room by tacking or leaving the zone herself.  And, I suppose, once that “memory” interpretation has been made in Call E10, it must apply even in situations where the boat required to give mark-room doesn’t tack or leave the zone – as in the new RR Call.

The next question answered in the new RR Call is whether Y is sailing within the room to which she is entitled.   There are two interesting issues here.  First, the only room BB is required to grant to Y at positions 2 and 3 is room to round the mark as required to sail the course and room to leave the mark on the required side (see the definition mark-room).  Y could take that room by sailing out and around astern of B, but the RR Call asserts that when Y cuts inside B she is sailing within the room to which she is entitled.  In other words, the definition should be read in a common-sense manner and Y is entitled to carry out the rounding and passing maneuver in the natural way, inside B.

The second issue is whether Y "takes too much room" during the scenario.  According to the text of the Question, as soon as Y jibes onto port tack she “luffs rapidly”, implying that after she jibes she takes the minimum space she needs to round inside B (the boats are keelboats, so Y’s arc seems unnecessarily wide to dinghy sailors, but the words about luffing rapidly assure us she is not taking too much room in positions 2-3).   However, if we look at her entire track since she entered the zone, she clearly takes more space than she needs to sail to the mark and round it on the required side.  The key here is she doesn’t need the protection of mark-room until she jibes back onto port tack, so before that moment she can sail where she pleases.  When Y loses her right of way just after position 2, she is entitled to the space she needs to round the mark in a seamanlike way, starting at that position.

To see a common application of this principle in another context, consider the diagram below.  Yellow enters the zone at a leeward mark clear ahead of Blue.  Because she is clear ahead, she has right of way; and in any case, Blue cannot reach her.  Until position 2  Yellow does not need to rely on her right to mark-room, so, instead of sailing to the mark she sails wide (but not wider than her proper course – see rule 18.4).  When she jibes onto port tack, she is required to keep clear of Blue, who is on starboard tack.  Blue has to take avoiding action, so according to the definition keep clear, Yellow breaks rule 10 (Port-Starboard). 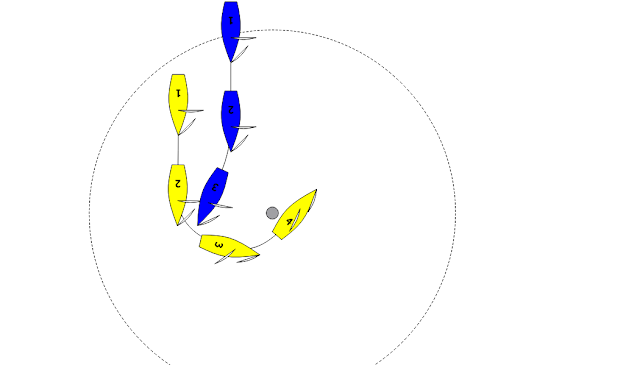 Suppose Blue protests Yellow for that infraction.  Yellow’s defense is that she was sailing within the mark-room to which she was entitled, and is therefore exonerated under rule 21 (Exoneration).  Blue argues that Yellow’s entitlement was room to sail to the mark, room to round it as necessary to sail the course, and room to pass it on the required side.  Yellow, she says, was sailing outside the room to which she was entitled in two ways.  First, she didn’t sail to the mark wen Blue gave her room to do so, and second, the definition room includes the word “promptly”; by sailing wide on her proper course instead of sailing directly to the mark, Yellow failed to carry out the mark-rounding maneuver promptly.  Therefore, Blue says, Yellow should be penalized for breaking rule 10 just before position 3.

The protest committee should decide that when Yellow was clear ahead she was not required to approach the mark “promptly” because she had right of way.  Once she lost that right of way and thus really needed mark-room to protect her, she was then obliged to sail to the mark and round it promptly, as she did, so she is exonerated under rule 21.  And that is the principle used in coming to the conclusion in RR Call 2019.001.

*Note: I am a member of the World Sailing Team Race Rules Working Party, which edited and approved the new RR Call, but the views expressed here are my own and do not represent the views of that working party or of any of its other members.