ISAF has released a set of new Test Rules for Match Racing. These rules will be tested in events worldwide in 2015, and, presumably, if the tests go well, adopted in the 2017 match-racing rules.


The Test Rules involve four changes to the Racing Rules of Sailing: they add a new rule 7, 'Last Point of Certainty'; they replace rule 18 (Mark-Room) with a much simpler rule from the America's Cup; they change the definition of 'Mark-Room'; and they replace rule 17 (On the Same Tack, Proper Course) with a much more complicated rule from the Alpari World Match Racing Tour. I quote each of the Test Rules below, followed by my commentary. A zip file with the new rules, official explanations of what the changes mean, and revised Match Race Calls for these rules, can be found at http://www.sailing.org/documents/racingrules/experimental-rules.php. In that same zip file is an “Implementation Document” describing how to write Notices of Race and Sailing Instructions to implement the new rules.

It is not clear yet what events will use these rules, but any event that wishes to do so must obtain specific permission from ISAF (under rule 86.2) or their national authority (under rule 86.3). In the United States, event organizing authorities should go to http://www.ussailing.org/race-officials/rules/experimental-rules/ for instructions about how to get permission under rule 86.3.

In what follows, I designate Test Rules as “TR x.x” and current rules as “RRS x.x”. Remember, these rules are for match racing only. Rules that are perfectly reasonable when there are only two boats involved might not work at all well for larger groups of boats.

TR 7 LAST POINT OF CERTAINTY
When there is doubt as to the relationship or change of relationship between
boats, the last point of certainty will apply.

My comment: The principle of Last Point of Certainty is already in the Match Race Call Book, so this will not have any effect on match racing.  (The principle, as stated in the Call Book, is that “umpires will assume that the state of a boat or the relationship with another has not changed until they are certain that it has changed. For example, a boat is not judged ‘beyond head to wind’ until the umpires are certain that she is so.”)

Rule 18 applies between boats when they are required to leave a mark on the same side and at least one of them is in the zone. However, it does not apply between a boat approaching a mark and one leaving it.

(a) When the first boat reaches the zone,

(b) If the boat entitled to mark-room leaves the zone, the entitlement to mark-room
ceases and rule 18.2(a) is applied again if required.

(c) If a boat obtained an inside overlap and, from the time the overlap began,
the outside boat is unable to give mark-room, she is not required to give it.

When an inside overlapped right-of-way boat must tack or gybe at a mark to sail
her proper course, until she tacks or gybes she shall sail no farther from the
mark than needed to sail that course. Rule 18.3 does not apply at a gate mark.

My comments:  TR 18.1 is considerably shorter than RRS 18.1. Of the three conditions in RRS 18.1 specifying when rule 18 doesn't apply, TR 18.1 keeps just one: TR 18 doesn't apply between a boat approaching a mark and one leaving it. That means TR 18 applies at windward marks to boats on opposite tacks, whereas RRS 18 does not. And because TR 18 applies to them, boats beating on opposite tacks can now be overlapped when one of them reaches the zone – which is generally not true of boats on opposite tacks on a beat to windward under the RRS (see the last sentence of the current definition 'Clear Astern; Clear Ahead; Overlapped'). This is a huge change from the current rule.

TR 18.2(a)(1) is just the overlapped part of RRS 18.2(b). If one of the boats reaches the zone while the boats are on opposite tacks, the inside boat gets mark-room throughout the rounding, regardless of whether she tacks later or the overlap changes.

At first glance, TR 18.2(a)(2) looks like the clear-ahead part of RRS 18.2(b), but it's not. Instead of the clear-ahead boat becoming entitled to mark-room, under the Test Rules the boat that reaches the zone first, either clear ahead or clear astern, gets mark-room.

This worries me. When RRS 18 was written (and rewritten), the authors were careful not to use the order of entry into the zone as the criterion for which boat gets mark-room, for the simple reason that the order of entry can be much harder to determine than whether there was an overlap when one of the boats reached the zone.

Frequently, but not always, it's easy to see which of two non-overlapped boats enters the zone first – she's the one in front. But not always, if the boats are separated laterally. Consider the scenario shown below, where the boats are coming to a starboard-rounding windward mark on starboard tack, with Blue on the starboard-tack layline and Yellow about 1.5-2 hull lengths ahead and to leeward of her. At position 3, it's clear that both boats are in the zone. But which entered first? Note that 'Last Point of Certainty' doesn't help in this situation – the last time we're certain about anything, both boats were outside the zone. 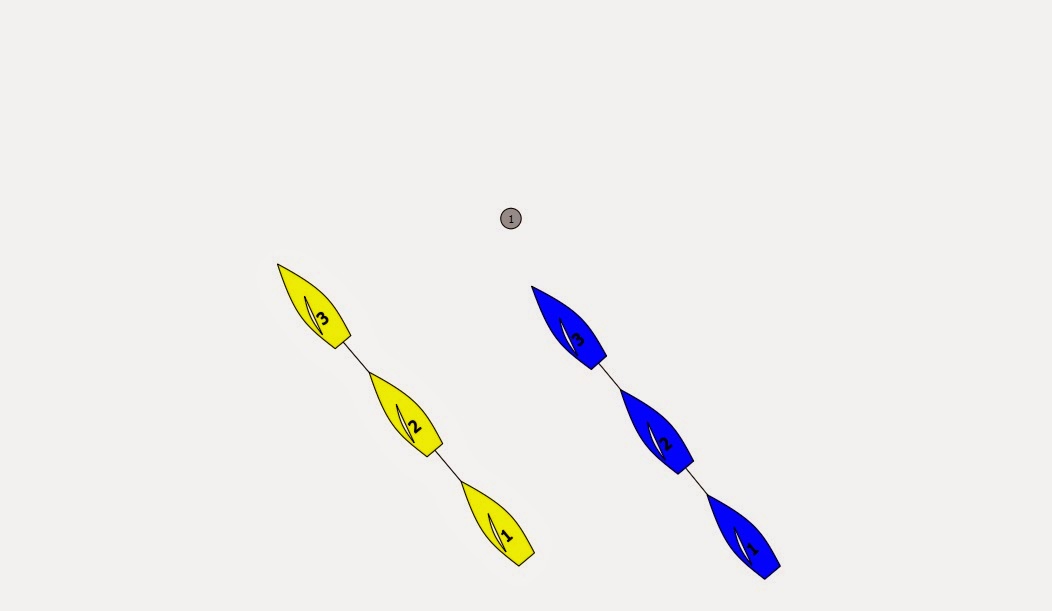 TR 18.2 is copied verbatim from the rules for the 34th America's Cup, where it was used in both the lead-up series in AC 45's and the match race series in AC 72's. But those boats carried systems which tracked the boats in real time to within a couple of centimeters and not only informed the crew of exactly when their boat entered the zone but also notified the other boat of that fact, by means of bright lights on bow and stern. Of course, other match races will not have access to such technology, and I foresee a problem with scenarios like the one shown here.

The question in my mind is, why this change? The criterion in RRS 18.2(b) is just as short and uncomplicated, easier to judge, and in cases of doubt can be resolved by the Last Point of Certainty (i.e., RRS 18.2(d)).

The application of rule 18 to boats on opposite tacks on a beat to windward will have substantial impact on match-race tactics for beats. For example, consider the scenario shown above and suppose the mark is displaced to the left in that diagram, so it's clear that Yellow entered the zone first. Then, even though she's the left-hand boat on the beat, she's entitled to mark-room. So she simply goes to the port-tack layline and tacks. Under TR 18.2, Blue has to duck her and let her round the mark.

On the other hand, under RRS 18 when boats are approaching a starboard-rounding windward mark on opposite tack a starboard-tack boat has a little problem, because when she tacks to round the mark she risks breaking rule 13, Tacking. Under TR 18.2 she has no such worries – she is entitled to mark-room regardless of whether she tacks.

TR 18.3 limits the right-side boat's advantage, however, in that scenario. Under RRS 18.2, the starboard-tack boat solves her problem with rule 13 by dialing down (if she can force the port-tack boat to go below the port-tack layline) or dialing up until the boats are both nearly head-to-wind. Because the starboard-tack boat can tack away or break off the dial-up when she wishes, she frequently gains two or three lengths by that maneuver. But if the port-tack boat is above the port layline, this play requires the starboard-tack boat to extend her tack past the layline to intercept the other boat, and under TR 18.3 she will no longer be allowed to do that – she must tack for the mark when she reaches the layline. Of course, she can tack and then luff, but that move risks getting rolled, and generally is not nearly as effective as a dial-up.

TR definition of Mark-Room
Mark-Room Room for a boat to sail her proper course to round or pass the mark.

This definition of Mark-Room is breathtaking in its simplicity and, I think, will work for match racing. I do not think it would be good for fleet racing. At a leeward mark, a boat's proper course is a big, wide turn that allows her to maintain her downwind speed through the mark rounding. The current RRS definition of mark-room entitles a boat only room to sail to the mark and round it – a much tighter rounding than her proper course. In fleet racing the Test Rules definition would be problematical because the inside boat would use up much of the zone in her turn, forcing all boats outside her to sail even farther from the mark (and outside the zone). In match racing, I think it will make little difference to the game; but why change the perfectly good definition in the RRS? In my opinion, if it ain't broke, don't fix it.

My comments: Effectively, this change means rule 17 only applies on windward legs and when the overlap was established after the starting signal. This means the sailors and umpires don't have to keep track of how overlaps were established in the prestart, and it also means that on a leeward leg, if the trailing boat can get a 'hook', that is, a leeward overlap from astern, she can luff the other boat (subject to rule 16.1).

Under RRS 17, if Blue establishes a leeward overlap on Yellow from astern on a leeward leg, she is required to gybe for the leeward mark when she is clearly at the layline to that mark. Under TR 17, Blue can simply sail straight, holding Yellow out until Blue wants to jibe for the mark – which could be when they've passed the mark completely and have to beat back up to it, with Yellow in Blue's bad air. To my mind, this allows an exciting tactic and eliminates a difficult and inconsistent call. My only question is, why only downwind? It's much harder for a boat to get a hook on a beat, and if one does, why not let her luff the other boat?

By the way, the boats in the diagram above reach the zone simultaneously, at position 3. See the same diagram, below, with the zone drawn in. 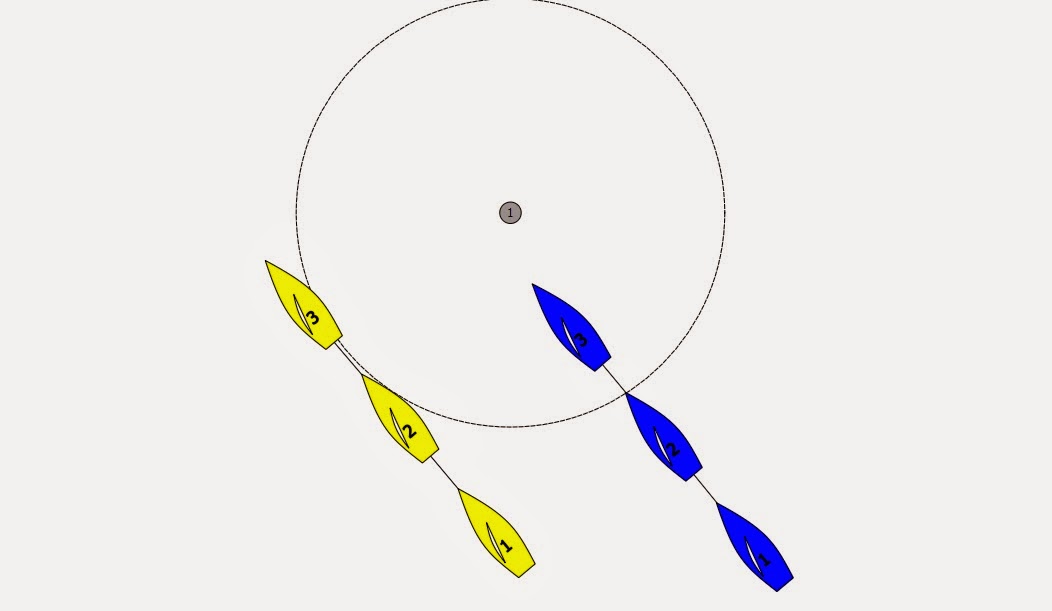