What's a 'black and white flag'?

The pre-2013 team race rules (Racing Rules of Sailing (RRS) Appendix D) allowed umpires to display a black flag if they wanted to hold a hearing after the race.  Two examples of when they might do this are if there might be damage from contact, or if a team gains an advantage from a foul (think about an illegal mark trap where the boat that gains from the trap doesn't break any rule, so the umps can't make her spin to remove the advantage).  The problem with using a black flag for this purpose is that, to the uninitiated, it looks as if some drastic penalty were being administered -- after all, in match racing a black flag ends the race and awards it to the other boat.

The pre-2013 Appendix D also allowed the umpires to display either a green flag or green-and-white flag to indicate "no penalty".  The problem with an all-green flag is that sailors who are red/green colorblind can't tell it from a red flag, which of course means the exact opposite of a green one.

Appendix D of the 2013-2016 Racing Rules of Sailing solves these problems by changing the black flag to a "black and white" flag, and requiring a "green and white" flag for "no penalty".  This, of course, poses the question of exactly what green-and-white and black-and-white flags might look like.

Appendix C for Match Racing has always specified a green-and-white flag signifying "no penalty", and most event organizers meet that requirement with something like this:

So I figured, we could just use the same checkered pattern for black and white flags.  But Richard Thompson, the chairman of the Appendix D Working Party, set me straight.  He points out that in dim light green and black might not be easily distinguishable, so we need another pattern.  He suggests something diagonal: 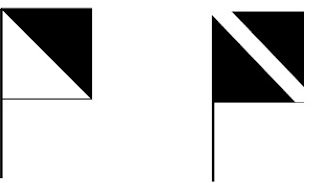 Richard points out that any distinctive pattern would do -- maybe a skull and crossbones?  I agree such a flag would satisfy the rule and distinguish itself from the green-and-white flag, but I prefer Richard's diagonals.

So, before January 1, 2013, when the new RRS take effect, we should go to the local sailmaker (or flagmaker) to get a new set of diagonal black-and-white flags -- or add a diagonal white stripe to the flags we already have.